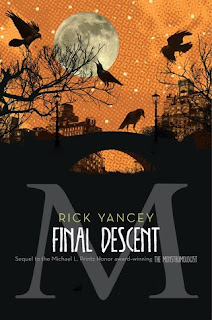 It’s been a while since I read a book and even more since I blogged about it. I’ve been lost lately, but upon reading a good book, it’s just impossible not to share my thoughts about it.

I’m proud enough to finally finish another series I’ve been reading. I love series and I do choose series more than standalones, but at the same time I don’t want to rush into it, I want to make the story last longer.

And this one was worth the time.


The Final Descent is the last book in the Monstrumoligist series and it’s a book I did enjoy so much. We’re following William James Henry since the day he met Pellinore and was practically forced to live with him, but there were little details, we missed, like the part where they had to learn each other and other little stuff that I felt were missing.

It was really interesting to go back and read about those things again, for the first book was so good that lured me again into that fascinating feeling of monstrumology and monsters.

In this last book, we do see another story, one of the last adventures that Pellinore and Will faced, but at the same time, we go straight to the future, where they have grown apart. I liked the changes between time and place and I was curious to learn what actually happened between those two, what terrible disaster was the one that forced them to separate for those two did have a love and hate kind of a relationship.

The story unravels fast and as straightforward you seem it is, there are secrets and details that do matter in the progress of the book. I felt so touched and so close to Will, I was able to feel the desperation and confusion of a child that was forced to grow up and face all kinds of terrible things that do leave a mark upon his soul.

I really love Rick's Yancey writing. His words grab me and pull me right into the story.

So, I’m gonna end this post, with a few quotes, hoping that I can share the magic I get from this book.

“I’m the infinite nothing out of which everything flows”

“I’ve always wondered what would kill you first, Warthrop: your titanic ego or your colossal self-pity.”

“There are no beginnings or endings or anything in between. Time the lie and we the circle and the infinite contained in the amber eye. You know what is coming. Will you turn aside?”

Email ThisBlogThis!Share to TwitterShare to FacebookShare to Pinterest
Labels: Rick Yancey, The Final Descent, The Monstrumologist, Will Henry