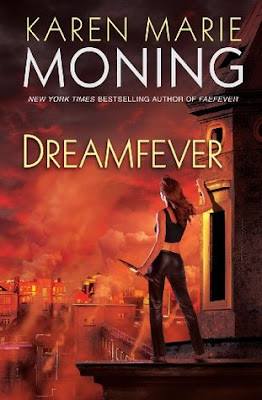 What can I say about this one, huh? Especially the beginning and the end left my jaw hanging open and my eyes wide with terror. What the feck, right? (as Dani would say.)

There are things in books that we never expect to happen because we're used to see the MC always protected or saved in the last minute by some magical power or some courageous character that has her back. I love that Mac isn't always protected and shitty things do happen to her quite often.

But this? Well, I didn't see it coming.

"Who'd've thought that destruction could be so beautiful? Seductive. Consuming."

Mac is a wreck. She reeks of sex and dark Fae and she surrenders to her emotions and animal urges. She can't think, she can barely speak so she's not even real person anymore. She's vulnerable, in pain and unprotected. Until Barrons comes to save her.

It didn't occur to me that she would end up being a priya which was interesting even if it was devastating. And it certainly didn't occur to me the way that Barrons would try to save her from death by sex! Oh, man! Really? I mean, that was ... really I have no words. I liked Barrons before, but after that, I really loved him because even if he did enjoy saving Mac, there was that moral consciousness that made him stop and remind her all the things she had forgotten. He talked to her about Alina, about her parents, the rainbow colors and he fought with his urges too in order to make her whole again. Those first chapters of this book are truly breathtaking.

As the story picks up, we see more destruction. The world has collapsed, bowed to the Fae and people are doing all sorts of strange things in order to survive. What else can they do without a way to protect themselves, I wonder. That is one of the drawbacks in the series so far. Only side-seers can see the Fae and only two weapons can kill them, how the world will be saved? Eating Unseelie makes you strong and able to see them but people are still unprotected. There is a promise of a solution to this one though, so I look forward for the next book.

At the peak of this book, we see Mac full in control again, stronger and fighting back fiercely than ever. She's determined to kill every last Fae even if she has to do it by herself. Revenge is driving her and I can finally say that she's the MC I was waiting for! She has nothing to do with the pink little girl she used to be and I'm in for more dark, kick-ass Mac!

And then there's the ending. Right when we thought that everything was under control everything goes to hell again. I won't tell you why, for it will be a huge spoiler, but Mac collapses again and we left wondering why. But deep down we do know the reason. It was before us all along. It’s a cliffhanger and it's going to make you chill!

Have you read this series? Tell me about it!

Here are a few quotes.

"I might have been lost for a while but I was never gone."

"Names are illusions, nonsensical labels seized upon by people to make them feel better about the intangibility of their puny existence."

"Strength wasn't about being able to do everything alone. Strength was knowing when to ask for help and not being too proud to do it."

"Life's an ocean full of waves. All are dangerous. All can drown you. Under the right circumstances, even the gentlest swell can turn tidal. Hopping waves is for the weekend warrior. Choose one, ride it out. It increases the odds of survival."