Ignite me by Tahereh Mafi 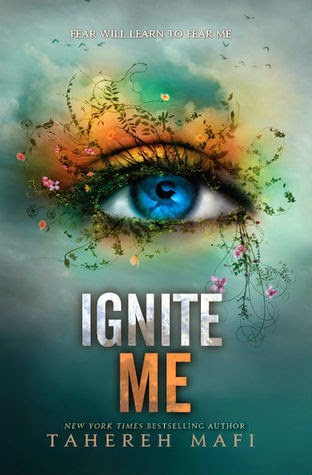 Before I start talking about this book, I need to say that I was confused about this series. It was hard to make my mind about the plot, story and characters. But I wanted to finish the books and see the bigger picture. Well, now that I've seen it, let's talk about it.

Always spoiler free so don't hesitate to read the post! :)


I cut to the chase and say that I didn't like this one. It's my least favorite in the series and now that I'm looking back at those books, I see that the first one was as good as it could get. The rest of the story felt like a falling domino.

Here's the thing. The bigger part of this book is just people talking about what has already happened. They talk and chat and whine and then talk some more and more talking more talking and arguing that made me curse and say: well that's enough! Stop telling me stuff. Just shut your mouths!

And then after some more telling there is a promise for action. Well, wow, that's the good stuff, right? But no. It didn't deliver and what was the major scene in the book, felt like science fiction. Don't get me wrong, I like strong, independent characters but there must be some realism or else it's just funny. In my opinion it was too much telling and too much unfounded facts. Does this make sense to you? Have you read this book?

I must admit that I like this author. I mean, Tahereh Mafi, from what I've seen around the internet, sounds like a very happy and dreamy girl. Honestly, I wish I liked her books. If she writes more, I'll give a try again. But until then, Shatter me series take no more than two stars.


Here is a quote I actually enjoyed.

"In a world where there is so much to grieve and so little good to take. I grieve nothing. I take everything."