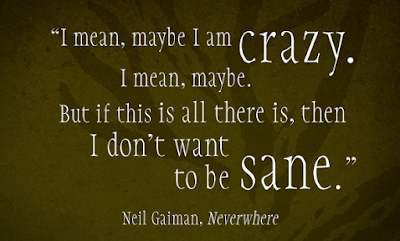 There are all kinds of people in the world. There are those who need to be the center of attention, wanting to be admired and they’ll do anything, as long as there is someone to talk about them and their achievements. But there are also those people, who move through life silently, and many times they end up falling between the cracks.

There’s a place for those people, just under the streets of London, and you can’t even dream of it. But Neil Gaiman has, and that’s a book it worth to be read.


I love Neil Gaiman, I really do, but it’s not my unmeasurable admiration that makes me talk about his books with such a passion. It’s just that he’s so damn good.

Neverwhere drew my attention just by the first paragraph on the back cover of the paperback.  It read: “Under the streets of London it’s a place most people could never even dream of. A city of monsters and saints, murderers and angels, knights in armor and pale girls in black velvet. This is the city of the people who have fallen between the cracks.”

And he had me. He had me there and then, wrapped around his words.

In this book, we follow Richard Mayhew, a simple man, living a simple life. He has a decent job, a very pretty fiancé, even though a little bossy, and a friend who’s good to go for drinking. But Richard loses everything by a single act of kindness and his life goes literally upside down.

I was amazed by the idea of London Below, a place so similar, but yet not so alike, with London Above. Richard found himself wondering in a new place, meeting strange people and get tangled in a life and in a mission, that he didn’t choose. Every act, every decision we make has an effect but it happens that sometimes it’s harder to set things straight after going to a road- that unwillingly or not-we chose.

We follow the story by multiple POV’s that gives us the advantage of knowing more than Richard does. And every character in the book is so unique and so real, as only Neil Gaiman can make him.

This book will guide you in London’s narrow streets and dark alleys smelling of beer and piss, but it’ll also make you see London in a way that you could never imagine. For we do know that there are always two sides in every story and this one has both.

I’ll let the rest to the book…

“You've a good heart. Sometimes that's enough to see you safe wherever you go. But mostly, it's not.”

“He had noticed that events were cowards: they didn't occur singly, but instead they would run in
packs and leap out at him all at once.”