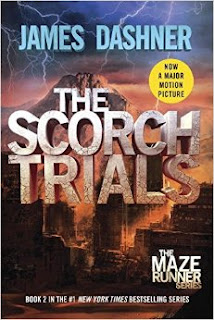 It’s been a while since I read the first book in this series. Although The Maze Runner was a book that thrilled me, I didn’t feel the need to keep reading. So I kept postpone it until I saw the books collecting dust on my shelf and I thought: It’s now or never.

So let’s take a look at The Scorch Trials.


Thomas thinks that he escaped the Maze but he soon discovers that it’s yet another trial. WICKED is determined to force more troubles down their throats but this time things start to make sense.

If you think about it, this book is very similar to the first one, only that now, Gladers have a clue of what’s going on. Suddenly there are more info, more memories but instead of making things clear I got confused. Okay, one thing or two were pretty obvious since book one, but the more the author tries to explain, the more I end up feeling troubled.

I guess that this is the author’s goal but I had a hard time see a point in this book. The Gladers are trying to survive in a most unwelcome place, having to face some very crazy people, but now they know that people are experimenting with them. Why aren’t they trying to fight? Why do they keep following their orders?

Mostly I think that it’s the too many characters that cause me a headache. Group A, Group B, girls and guys, there’s a confusion of faces and  I just feel that Thomas is dragging them all along, which makes me feel them like a burden.

What I liked in this one is that always something happened so, even if it didn’t make sense to me, there was plenty of action. I was curious to see what would happen in the end, but I was not happy with the result.

Hope the third book will have some answers.
Posted by Athina at 10:04 AM