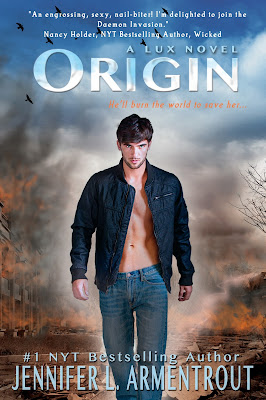 Daemon and Katy are not in a good place. And not because they are not getting along. It's just they are apart. Daemon is willing to do anything to get her back and he is really doing it.

It had been a while since I read a Lux book and to be honest I wasn't so thrilled since in this one the narration is changing. The first three books were from Katy's POV and here, we see Daemon's too. Well, I'm not sure how I feel about that. I loved the way Katy was talking about him and not being in his head was great. I didn't want to get to know him this good. I liked the mystery that was hanging in the air about him.


But all the mystery is gone and Daemon isn't so interesting anymore. Reading his thoughts made me frown a lot. Suddenly the bad-ass, irritating guy became so soft and even fragile. Katy is his weakness, I get that, but I thought he was a bit smarter and honestly tougher. He's an alien, so I expected him to be a little different than a simple, humble human. At least I expected him to think like an alien.

Katy on the other hand, is growing tougher. She is imprisoned and even when she falls apart she pulls herself together and sticks to her beliefs. I like Katy she's calm, but strong and she has evolved so much since the first book.

Regarding the story, it was okay, but I couldn't connect so much. The first part of the book was a bit dull as we kept following Katy around and there weren't so many things that could happen anyway. It was later that things go really interesting in there! I liked the Blake parts and the new info we acquire is quite promising.

The ending was good. The very last scene makes me want to keep reading. So cheers to the next and until then, here's two quotes.

"Part of me was elated, while the other half was horrified by what I was sensing-and I hoped it was my imagination."

"There was nothing but our respective short breaths and my own pounding heart thundering in my veins."

Have you read this book? Feel free to share your thoughts!