Girl on the Train by Paula Hawkins 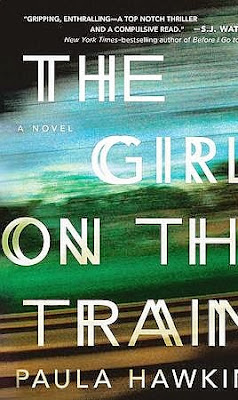 There is a girl on the train.

Same train, every morning. Watching out the window, inspecting the scenery, looking at unknown people. Every day. Until she starts noticing a couple. The same couple on their deck, drinking coffee, kissing or just sitting. Then what is unknown becomes familiar and when the woman goes missing, Rachel, just has to help the police because what she saw from the train may be the answer they're seeking.

A girl on a train.

A woman buried by the train tracks, old clothes tossed aside. Rachel's story drew me in from the moment I started reading. Her recounting was so vibrant, emanating pain, misery and I knew before she told me that she was a troubled woman. So I was more than excited to meet her and Megan, the woman on the deck, even if I knew she would go missing, I was longing for her story too.

To my surprise the story is told by different POVs. We see Rachel, her complicated life and her obsession about Megan. But we also see Megan's POV, but a year earlier. So you understand how tension builds up. We follow the events, unfolding back and forth in time which is exciting. Later in the book there is another female narrator adding her parts of reality to the story. And the thing is that everybody lies.

There are secrets, hidden secrets, some known only to certain people and others we have to figure out ourselves. So the image we get while reading the book is as fuzzy as the scenery before us while the train moves fast and away. Blurry letters on the page, that's how it is. And I absolutely loved it.

There is a certain appeal in damaged characters that I can't really put a name on it. They emanate a mystery waiting to be solved, but mostly, I believe, is the promise of salvation. Can we really get close to the edge and don't fall? That's the human nature, pushing ourselves to the limits and if we survive, then it's another projection of ourselves we pull back from the emptiness.

Enjoy the quotes. And read the book.

"One for sorrow, two for joy, three for a girl, four for a boy, five for silver, six for gold, seven for a secret never to be told.

"Hollowness: that I understand. I'm starting to believe that there isn't anything you can do to fix it. That's what I've taken from therapy sessions: the holes in your life are permanent; You have to grow around them, like tree roots around concrete; you mould yourself through the gaps. All these things I know, but I don't say them aloud, not now."
Posted by Athina at 1:59 PM