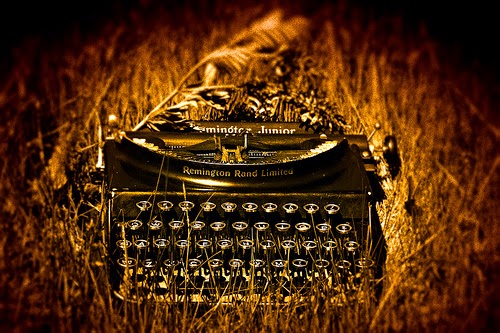 NaNoWriMo fever! Do you feel it? I can almost hear the whispers in the wind, the loud cheers and the shy screams. November is coming and we crack our fingers, squeeze our brains but most of all we try to control our breaths and get ready for the new novel we want to complete at the end of the month.

I haven’t decided if I’ll join NaNoWriMo this year, but I’m highly tempted to try and finish that first draft of the novel either way. So here’s the way.

There are some ‘rules’ I unconsciously follow when I’m writing a new story. I’ve done it three times so far and I’m doing it to the new project I’m currently working on. It’s true what people say that the first draft is the easiest to write so don’t frown. The first draft is like a piece of cake compared to the editing that will follow. So sit back and enjoy writing this first draft, because it will only be written once.

It starts with inspiration. But wait, when I say inspiration, I don’t mean that you have to know everything about your story. You don’t have to know all the details, all the characters and not even the plot. All you need to start writing may be an image. Let’s say a woman getting into a house. That’s how my last idea was born. What is simpler than a woman walking into a house? But hey, there is a man sitting in a chair and I think he is sad. Something is bothering him, but I don’t know what. I get the feeling that the woman wants to talk and suddenly I’m in her head, listening her thoughts.

Word by word, you start building an image and as you write your mind creates scenarios and before you finish the paragraph, you have an idea. Don’t go big, don’t search for THE idea to start writing.
Just put a thought, an image or even a sound on the paper. The rest will follow. Step one is done!

It’s possible that you’ll find yourself stuck along the way, either in the first paragraph or sentence, it doesn’t matter where you’ll see the wall rising before you. The thing is to tear it down. And it’s up to you so you can do it. Just stay calm. What I suggest? Write your way out of that trap you fell. Write something to move the character even if it doesn’t fit so well. You can always change it later or you may even discover that it can work. Believe me it happens! As I like to say, if your character is ready to fall off a cliff and you don’t know how to save him, just let him fall. A million things can happen before he hits the ground. So step two is tear the walls down. The way doesn’t matter.

Here comes the hard part. Let’s say you wrote 5K words, or 10K or 20K, you’ll feel the need to read your story, to see where it’s going. Well, do that, it may help it may not, but please, oh, please, don’t edit! Once you get into that trap, your brain will start reacting in a whole different way cutting your creativity into tiny, bloody pieces. It’s cruel, don’t do it. Think about the story, the MC, the second characters, the plot or the developments. Don’t think about the words. It’s not the time yet. Step three concurred!

And here comes the challenge! The terrifying step number four. Assuming you have the inspiration, you managed to get over the writer’s block and you had the self-restraint not to edit. The only thing you can do now, is write. Simple and plain as that. But the phone is ringing, you husband wants to talk to you, your mother needs helps, your boyfriend wants to go drinking, your girlfriend is in chatty mood and you head is spinning. Can you shut them out? Can you cover your ears and don’t care about that stuff, for let’s say two hours? Can you do it for three? If you can do it for four you’re my hero!

Personally I can shut the world out, I can also work even if the world is spinning. But I can’t do it for long. Two hours is the max I can go lately. Then I need a break and most of the times, I won’t write until the next day. So that’s where I’m going to focus since I want to write this project in– let’s say–a month. How you’ll do it?

This is how I’m doing it and this time I’m gonna try to do it faster. Like in fast forward or something. I smile in the thought of seeing yet another project being completed. I want to feel that energy floating in my veins and the fireflies show me the way!

Would you do that with me? Four harmless steps can make our wishes come true. Inspire, blow up the walls, don’t edit and built your cave. Why do you think they call it writing cave? You have to retreat there in order to pull that story out of your soul. Built your cave, like you want it, but it needs to be a cave.

Email ThisBlogThis!Share to TwitterShare to FacebookShare to Pinterest
Labels: a novel in a month, first draft, focus on writing, NaNoWriMo, on writing, write fast