Harry Potter: The Chamber of Secrets 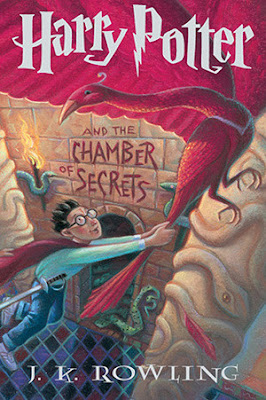 The journey to Harry Potter world continues since I can’t find a reason to stop reading this series. Yep, I’m not young enough for those books, but we’re kids deep inside, right? And I did enjoy this second book!

Harry Potter and the Chamber of Secrets has a very interesting plot. I dare say that it’s not so “childish” as the first one. Harry enjoys the new reality and he becomes stronger. He starts to trust himself and gain some confidence. He doesn’t feel unwanted like he does when he is with his aunt and uncle and even when things go south and everybody thinks that he is he Slytherin heir, Harry has his friends to lean on.

What I really enjoyed was the feelings that Harry has for Albus Dumbledore. Harry was afraid of him and didn’t really know if he was one of the good guys or not, but in this second book, we get a glimpse of the trust and the friendship that we know those two will build in the future. Albus is not so warm towards Harry, but affection is there and Harry starts to notice it.

Dobby, house-elf who serves the Malfoy family, was one of the great new characters in this book. With his guilty consciousness, his terrible choices and his tenancy to cause troubles, Dobby made me like him a lot. I want more Dobby!

I loved the plot in this one, the story was wonderful and the attacks and the shadow over Hogwarts crated a very mysterious atmosphere. J.K Rowling stirs some very powerful feelings with her writing.

“There was a long, dreadful, piercing scream. Ink spurted out of the diary in torrents, streaming over Harry’s hands, flooding the floor. Riddle was writhing and twisting, screaming and flailing and then – He had gone.”