The hitchhiker's guide to the galaxy series 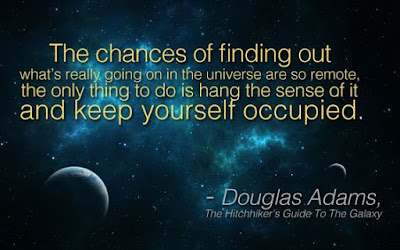 Yep. I read this crazy trilogy of five and I’m ready to share the excitement. But what can we really say about those books, huh? I don’t think that my words can describe the magnificent and yet so complicated and mind-blowing story that came out of Douglas Adams’s head so many years ago.

If you’d ask me to say one word that can describe this series is: Paranoia!


The Earth is gone, the world as we know it no longer exists and yet Arthur Dent is still alive hitchhiking around the universe where nothing is given, not even time!

He spends years alone in an empty universe having noting and no one to keep him company. He travels around, he risks his life, meets people, fall in love and fall apart, he makes sandwiches and drinks tea while his companions are busy writing their own crazy story through the universe.


And just when everything finally makes sense, Arthur finds himself doubting his entire life! What is real and what is not? And where did the dolphins go? He struggles but he doesn’t give up and then he makes the terrible mistake of starting to enjoy life a bit and, immediately, all hell breaks loose.

I don’t really want to say anything and spoil the fun, so I’m just trying to make you curious enough to read this series! Do it, it is a must read!

Grab your towel, your copy of the hitchhiker’s guide to the galaxy and: DON’T PANIC

“People who talk to themselves on the phone, never learn anything to their advantage.”

“An SEP,” he said, “is something we can’t see, or don’t see, or our brain doesn’t let us see, because we think that it’s somebody else’s problem. That’s what SEP means. Somebody Else’s Problem. The brain just edits it out, it’s like a blind spot. If you look directly at it you won’t see it unless you know precisely what it is. Your only hope is to catch it by surprise out of the corner of your eye.”

“He hadn’t realized that life speaks with a voice to you, a voice that brings you answers to the questions you continually ask of it, had never consciously detected it or recognized its tones till it now said something it had never said to him before, which was “Yes.”

And I will end this post with a prayer!

Email ThisBlogThis!Share to TwitterShare to FacebookShare to Pinterest
Labels: Douglas Adams, fun read, The hitchhiker's guide to the galaxy