It’s been a while since I featured a book, but now I’m here with a good one.

I participate in Masquerade Blog Tours and we all are happy to present you … Running Against Traffic by Gaelen VanDenbergh.

I love this title. It makes my mind wander. We all are running against traffic in one way or another, right? But let’s see what she has in mind. 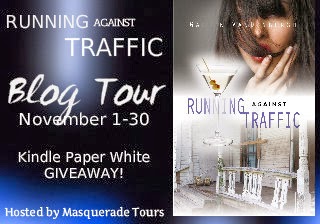 Paige Scott spent her childhood shuffled between relatives who ignored her, and her adult life hiding in her crumbling marriage to wealthy David Davenport. When David suddenly thrusts her into a remote, impoverished world, Paige is forced to face the betrayals of her past - not to mention the colorful townies of her present. Unexpected friendships and her discovery of running propel her on a jagged and comical journey toward learning how to truly live.

Running Against Time published on February 15, 2013 and it is a Contemporary Women's Fiction.

Here are some helpful links:

But this is not the end. Gaelen VanDenbergh has some interesting thoughts about Writing Realistically.

When someone says that a scenario, or a feeling, or a response, or something that happens to a character I have created is “unrealistic”, I find myself itching to ask this:

Based on what criteria – your own experience? Just because it hasn’t happened to you, or to anyone you know, does that make it unrealistic? This story is fiction – therefore, it is not real. However, I never write about something that I know nothing about. And more importantly, just because this person has not personally experienced anything like this does not mean that therefore it cannot be, or is even unlikely. That’s ridiculous. They have lived one life.

I admit, I understand the skepticism. I can’t tell you how many instances in my life have happened where I have been thinking “wow. I don’t believe it!” But, these were responses to things going on around me, in real life. So, in the end, I had to believe it.
The adage is true – truth is stranger than fiction.

I was recently invited to attend a book group, featuring my novel Running Against Traffic. Everyone in the group enjoyed the novel very much, but a few of them spoke up and declared what I have heard from a couple of reviewers as well. They didn’t buy that Paige would “take” what happened to her lying down. They wanted her to fight, to march right back to Philadelphia and resume her life. I asked them to what life? I have also been challenged about not providing enough information about Paige’s relationship with Al. To that I say I’m sorry, I’m just the kind of writer that prefers to leave a few details open to interpretation. Relationships are often strange, confused, unsure, passionate, disappointing, uplifting, co-dependent. Sounds like most of my past relationships, anyway! Write to me and let me know what you thought was going on with them, and I’ll write back and share what I thought was going on, what I think Al thought was going on, and what Paige thought was going on. And remember, there is more to come in the sequel. Just remember, you can think and decide for yourself. 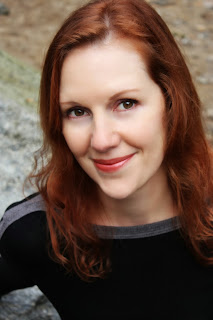 Time to meet the author. Who is Gaelen VanDenbergh?

Gaelen VanDenbergh is a writer, runner, and compulsive list-maker who lives in Philadelphia with her family, a fat cat, and several fish. Her debut novel Running Against Traffic, was a Global Ebook Award nominee, a semifinalist in the The Kindle Book Review’s 2013 Best Indie Book Awards, a semifinalist in the Readers' Favorite 2013 International Book Award Contest, Indie Book of the Day, June 30, 2013, a 2013 Beach Book Festival Award nominee, and has received a four star review in InD’tale Magazine.

When not writing, Gaelen enjoys reading, running races for charities, and spending as much time in Key West and the Adirondacks as she can.

Well that’s it. Do you want to connect with the author? Here are some important links:

What are your thoughts?
Posted by Athina at 10:56 AM