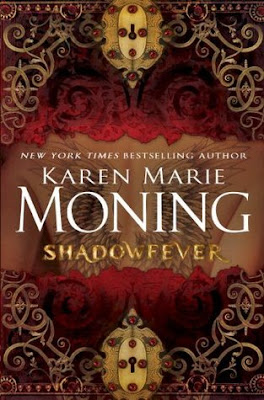 Oh, Mac! What are we going to do with you, huh?

Shadowfever indeed, because this book was shadowed by possibilities. So, until the end we're trying to discover the truth and shed some light on Mac's future and past.

That's a very interesting theory. Who is bad? Who is not?

Karen Marie Moning kept us wondering for so long. Each book generated more unanswered questions until everything piled up inside my head and I felt like exploding. Who killed Alina? What Barrons is? What's the story with Seelie and Unseelie? Why the dark book is after Mac? Who was the forth Prince? Were the hell is V'Lane? What secrets does Rowena hide?

Well, this book has answers.

To be honest, I didn't enjoy this one as much as the others. It felt like Moning rushed to close up all the open tasks and finish this book in a satisfactory way.

The beginning of the book was breathtaking. Especially after the amazing ending of the last one! Mac's thoughts were intense pulling me into the story and not letting me go. She was a wreck and so we watched her transform and putting her life under control again. But after that there was much history about Fae and more talking than I appreciated.

There were many developments and many answers, but the way everything happened felt ...like too much? I'd like to have some answers before we reach at the end because everything unravels toward the end and it could have happened differently. Why should I wait this long to know what was beneath Barrons's garage? Well, it was amazing to finally know, but why now? It doesn't change anything!

I believe Moning tried to spike some interest by keeping secrets and then she blurted them out one after the other so fast that made me lose my interest. She didn't gave me the time I needed to enjoy each revelation.

The ending was good. Not that I was thrilled but it was good. I expected more from a book that is filled with destruction. I know that there are other books in this series but it felt like the end. Are all the other books from Dani's POV? Did Mac's story ended? To me, it did, so I'm not sure if I will read the rest of the books.

That's it! Please share your thoughts! What do you think about Mac?

“Some things are sacred. Until you act like they’re not. Then you lose them.”

“Chivalry demands a suicidal bent. I don’t have one. I can’t get enough of life. I get off on waking up every day for infinity. I like being what I am. I got the best end of the deal.”

“During a blackout, people do what they’ve wanted to do all along but have repressed, afraid of the consequences. Worried what others might think of them. Afraid of what they’ll see in themselves. Or simply unwilling to get punished by the society that governs them.”

“Life is. Imperfect. Royally fucked up.”

“Most people are good and occasionally do something they know is bad. Some people are bad and struggle every day to keep it under control. Others are corrupt to the core and don’t give a damn, as long as they don’t get caught.”