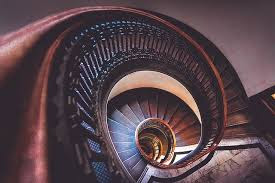 They say there’s only a thin line separating theory from action. It’s just a tiny decision, even though so hard to make, that turns thoughts into actions. It’s what people say, that the hard part is taking the first step on a stairwell which illuminates the path ahead of us.

I used to hop on that step and run upwards. Okay, yes, I stumbled and I fell a lot but it was never that hard to get back on track and on that first damn step!

These last few months though I catch myself gazing at that first, polished, wooden step and freeze. I lift up my foot but I cannot complete the movement. It results in me, turning my back and thinking:

And tomorrow comes, but same thing happens and too many tomorrows down the road, I still find myself admiring that first step.

And I do have it in me; I know that if I make the decision I’ll sprint to the top of the stairwell. Then I will come right down and give another try, but that’s another thing to discuss. So, I guess I’m not ready yet, which pisses me off.

But I feel tired and it’s not so much physically as it’s mentally. I’m running on fumes so I want to keep what’s left of my strength despite that a voice inside me screams at me to finally get some action.

So here I am at the bottom of the stairwell, and feet touching the ground.